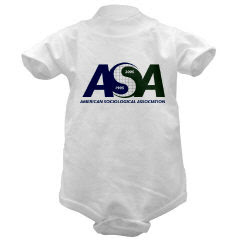 For only $10, you can buy an infant creeper with the American Sociological Association's special 100th Anniversary logo on it. The word 'creeper' for this seems, to me, the most exactly right thing I've seen today.

The ASA store also sells t-shirts with the logo. Interestingly, while you can buy ASA T-shirts in a standard women's cut if you scroll down far enough through their menu of options, what they choose to showcase with a photo on their website is the "Junior Baby Doll" cut for the sociologically-inclined nymphette.

When I first was looking through the store of ASA products, I felt guilty for how ridiculous I thought the various offerings were, because, after all, why shouldn't sociologists be so excited about what they do as to want to buy 100 buttons to celebrate the centenary of their professional association? Then again, even if I was more enthusiastic about sociology-in-general, I still can't imagine it translating into such enthusiasm for the ASA as to want to dress my dog up in my love. But in any event, my guilt was assuaged when I discovered that at the same time as the ASA is selling T-shirts with its logo, it is also selling coffee mugs and mousepads with a cartoon that revels in our discipline's general irrelevence: 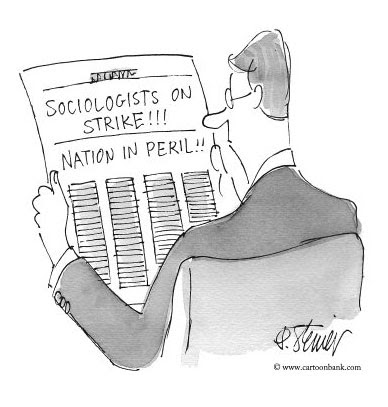 Wow, let me say it once again: I have the best commenters ever.

The ASA has it all wrong. No one wants their crummy logo on their baby, or any other family member. As my pals from grad school and I decided long ago, what we need is a T-shirt series:

or for a more contemporary look, Merton! Bourdieu! even Giddens!

for the sociology lady in your life, we have Myra Marx Ferree! Theda Skocpol! and Nancy Naples!

Get your today! Order the whole set!

In this case, life does partly imitate art. I had, up until a recent move, a set of Famous Economist trading cards that some textbook publisher handed out as favors at the '96 ASSAs. (The extra "S" signifies the imperialistically named economics meetings.)

"Alfred E. Neuman for ASA President" put that on a T shirt, buster!

Awesomely awesome, Nina! One thing I love about the late 1970's is how the technology existed to make custom T-shirts, etc., but basically with just that one font.

Nina, you should start a business selling t-shirts reading, "I'm a (fill in the blank), hire me." You'd make a fortune from grad students.

nina -- I want to see a picture of your husband wearing that shirt!

My husband is not so much into being blog-dentified, so I can't post it, but even better is the photo of him prcticing his ASA grad-student-presentation in the hotel room. God, did he have long hair. Really long hair (and it was after a haircut).

Where is the ASA centennial thong?