As already posted, I agreed to write an original dance as part of the grand prize for my friend Rob's NFL pool and post it during the Super Bowl. Rob was sporting enough to sweeten the deal by agreeing that if I posted the dance, he would perform it and upload the video to YouTube in time for the NFL Pro Bowl next week.

But, using the Holmes method of choreographic notation, I came up with the following sequence of steps. I call the dance "The Boy Detective": 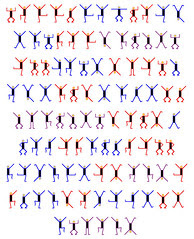 The dance is meant to be performed to the Chicago Bears' 1985 "Super Bowl Shuffle", but experimentation here in the Freese Funky Kinesthetics Lab has shown that the dance can be done equally well to the B-52's "Rock Lobster," Outkast's "Hey Ya!", the Watson Twins' "Elementary Dear," or practically any of the peppier parts of Freaktoast J's Stickfigure Semiotica album. So Rob will have several songs to choose from.

Special note to Rob's life partner: Be sure to roll out the yoga mat or something the first few times he practices this, especially the parts where he has to backflip into a one-armed handstand. Remember the friend of his from college who started breakdancing to some Van Halen song at your wedding? How he hit his head on the floor during a backspin and knocked himself unconscious? [Everyone else: yes, true story.] Make sure this doesn't happen to Rob, and make sure he e-mails me once he's uploaded his video so I can link to it here.
Posted by jeremy at 6:25 PM

The diagram, the post, this is all awesome, Jeremy! (Well, actually, I'll refrain from commenting on the dance itself since I haven't had a chance to try it out yet.) You're definitely one of a kind! (And I mean that in a good way.:)

BTW, is there some extra code we should know about regarding the different colors? E.g. smile when red, sneeze when blue, chant Go 'Cats when purple?

Eszter: Thanks. There is definitely special meaning to the different colors, although, for mysterious reasons, I'm holding off on divulging it for now.

[he should propose before she figures him out]

Wow, the Holmes method of choreographic notation is based on the Sherlock Holmes story where those figures stand for letters in a secret message, right? So does the dance actually communicate a message in words (rather than, say, emotions)? I am totally going to waste half the afternoon trying to decode it!

assuming the colors separate words (rather than hats, as in the story). right?

sorry if i am ruining your mystery.

As a matter of fact, AK, that's exactly right. I always thought they were flags in the story, but I guess they do look like hats.

AK (and J!) - based on what I can get from online sources on this:
1) "The Adventure of the Dancing Men" is almost certainly the source of the Holmes method of choreographic notation;
2) that means that this is a substitution cipher;
3) such things are cracked via frequency analysis; says Wikipedia: Frequency analysis is the basic tool for breaking classical ciphers. In natural languages, certain letters of the alphabet appear more frequently than others; in English, "E" is likely to be the most common letter in any given sample of text. Similarly, the digraph "TH" is the most likely pair of letters, and so on. Frequency analysis relies on a cipher failing to hide these statistics. For example, in a simple substitution cipher (where each letter is simply replaced with another), the most frequent letter in the ciphertext would be a likely candidate for "E".
4) However, Wikipedia has the cipher from the Holme's story and its translation, so that's probably the quickest way to break this!
All that said, I can't do this right now, so leave these clues in hopes that another JFW reader will take the next step(s).
It's nice when there's no JFW virtual kewpie doll at stake, so that cooperation (rather than competition) is encouraged (also, it helps that I already have a JFW kewpie doll!).