in which a compact disc is purchased 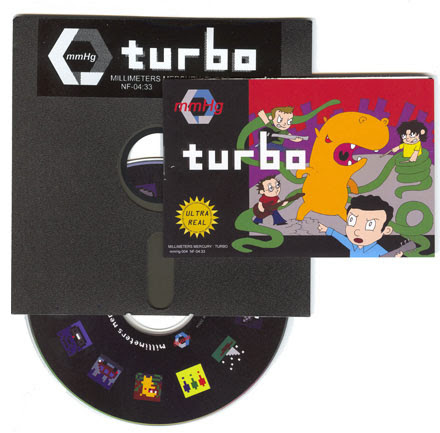 (my copy of the Turbo disc and its packaging)

For our younger or more-blurry-memoried readers, compact discs are round metal discs, about five inches across, that were the standard medium on which music was sold back when music was sold on media (in "record stores"!). They are like the CD-ROMs still sometimes used to distribute software--indeed, the "CD" in CD-ROM stands for compact disc--only they contain music rather than software.

Anyway, while I am currently spending as much on music as I ever have, I have not bought a compact disc since I don't know when (come to think of it, I do know when). Until now, that is. Via PayPal, I purchased a copy of Turbo, recently released by the Chicago-based Millimeters Mercury. I much enjoyed an mmHg (get it?) show I saw last year in Madison, despite being permanently brain damaged by the dirty taps at the bar where they were playing.* This alone would have been cause enough to buy the "CD", not to mention that it's what all the cool people seem to be listening to nowadays (hipness-insecure readers take note). Additionally, however, I had to buy Turbo on CD because it's not available on iTunes due to the sometimes capricious and suppressive regime at Apple Music.

Given that mmHg had to distribute Turbo on "CD", they made it fun: the album comes packaged inside a real 5-1/4" floppy disk, floppy disks--first in this larger size, then in a smaller and less floppy size--being the primary means of distributing software before the CD-ROM. According to their website, you can specify the color floppy disk you want; I didn't realize this or I would have selected yellow.

Of course, the first thing I did upon receiving the "CD" in the mail--music, sent through the mail! such a reminder of the Great Columbia House Binge of 1995!--was import it into iTunes. I really don't know when the last time was I actually played music off a "CD" instead of as a computer file; I wouldn't even know how to go about doing so here in the RV (can you play CDs in an Xbox?).

From my first time through it, Turbo gets the official and coveted JFW two-thumbs-up, with an extra mutant-thumb-up for the innovative packaging. Two of my favorite songs are "The Sun is Falling" and "Broken Typewriter," which are both available for perusal in live versions on the mmHg website.

I have heard from another mmHg fan there is a hidden track somewhere on/in/near the CD, but I can't find it.

*I lost four IQ points and an entire day of my life from the ensuing headache--the result of drinking a mere two pints of the tainted beer--leading to my resolution that I will never ever drink beer on tap again except at the halcyon hypersanitary environs of The Karaoke Kid.
Posted by jeremy at 2:54 PM