i want to play too!

The latest blog craze: everybody is posting photos of their morning coffee (here and here and mockingly here). But I don't drink coffee!* Indeed, coffee is one of those things where I wonder whether it really tastes the same to other people as it does to me or whether I have some freak gene that produces a tongue enzyme that causes coffee to putrify in my mouth. Even a microgram of coffee in a cake or whatever is enough to turn my stomach. So, instead, I take my caffeine ridiculously inefficiently, in the form of bone-destroying and possibly-to-be-discovered-as carcinogenic** diet soda.

Being a non-coffee-drinker in as coffee-centric world as academia is enough to give a person an inferiority complex. Thank God for the book a friend gave me: 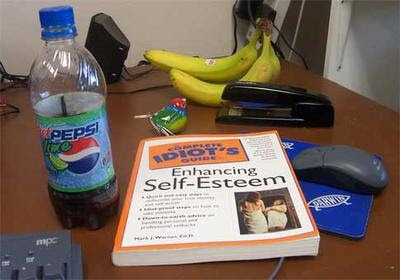 On the inside cover, in a epistolary preface addressed "Dear Self-Esteemer", the author does acknowledge the strangeness of pitching a book that would seem ostensibly about trying to increase the self-esteem of people who think they are complete idiots (actually, when put that way, it doesn't seem so strange at all, but rather on a par with The Best Person Ever's Guide To Humility and Realistic Self-Assessment). Anyway, while the editor moves to reassure the reader that of course we all know they aren't really a complete idiot, he then also says "We all have bits of the idiot in us." Upon reading this sentence, I thought: "Ah, the idiot. I ate his liver with some fava beans and a nice chianti."

Also, note how clean my office desk is! Inspired by my trip home, I am fighting a War On Clutter on both home and office fronts, which makes especial sense given my impending move.

* Except this one time I was supposed to meet an acquaintance at a coffeeshop, at which I typically get hot chocolate, but instead the coffeeshop closed earlier than we thought and just before I arrived. She had been thoughtful enough to buy me a coffee, and we sat and chatted outside. I was sufficiently touched by the gesture and awkward about telling this person I didn't know well that I didn't drink coffee that I drank the whole thing, revulsed sip after revulsed protovomity sip.

** Or at least so insist a couple of my more health- histrionic friends.
Posted by jeremy at 1:08 PM

Yes, you MUST kick the nutrasweet/cola habit or else you'll be osteopenic before you can say uh ... osteopenia. Do what I did (or do, except when I get that m*&$er fu*%ing diet soda jones)DRINK BLACK TEA! It's refreshing, it's delicious, and, chances are, it really does have health benefits. Earl Grey with a splash of sugar and milk ... just don't tell your fellow Bean-towners what's in the mug ...

Wait, is it the aspartame or the carbonation that breaks your bones? I'm confused.

Teddy: I don't drink tea either. Whatever it is that makes tea and coffee taste a little alike is the part of the taste I can't abide.

RWS: It's the carbonation, especially when in conjunction with sticks and stones, that breaks bones. Aspartnames will never hurt you.

Interesting. I'd always heard that carbonation was bad for your muscles, although I guess there's a connection there insofar as weight-bearing exercise builds bone density? Anyway, I drink tea and have a pretty low soda intake.

Frankly, it wouldn't surprise me if carbonation was bad for a person in multiple ways.